Willis Towers Watson Public Limited (NASDAQ:WTW – Get Rating) has been awarded a consensus recommendation of “Hold” by the seven ratings companies that currently cover the stock, Marketbeat reports. One analyst rated the stock with a sell recommendation and six gave the company a hold recommendation. The 12-month average target price among brokerages that have reported on the stock in the past year is $231.00.

In related news, insider Julie Jarecke Gebauer sold 1,400 shares of the company in a trade on Thursday, August 4. The stock was sold at an average price of $210.01, for a total value of $294,014.00. Following the transaction, the insider now owns 92,555 shares of the company, valued at $19,437,475.55. The sale was disclosed in a document filed with the Securities & Exchange Commission, accessible via the SEC’s website. Insiders hold 0.83% of the shares of the company.

What is the most productive stock you have ever owned? Dividends from these stocks have grown so rapidly over the years that they now earn us an average of 26%! When you start getting paid 26% on your money, your financial troubles tend to evaporate.

The company also recently declared a quarterly dividend, which was paid on Friday, July 15. Shareholders of record on Thursday, June 30 received a dividend of $0.82 per share. This represents an annualized dividend of $3.28 and a yield of 1.57%. The ex-dividend date was Wednesday, June 29. Willis Towers Watson Public’s dividend payout ratio is 11.64%. 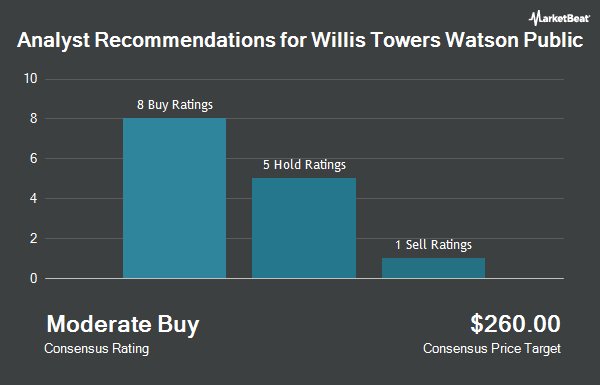 This instant alert was powered by MarketBeat’s narrative science technology and financial data to provide readers with the fastest and most accurate reports. This story was reviewed by MarketBeat’s editorial team prior to publication. Please send questions or comments about this story to contact@marketbeat.com.

Should you invest $1,000 in Willis Towers Watson Public right now?

Before you consider Willis Towers Watson Public, you’ll want to hear this.

MarketBeat tracks daily the highest rated and most successful research analysts on Wall Street and the stocks they recommend to their clients. MarketBeat has identified the five stocks that top analysts are quietly whispering to their clients to buy now before the market ripples…and Willis Towers Watson Public wasn’t on the list.

“Everyone wants lots of money and a good work-life balance”